Don Pendleton (1927-1995), known as the “father of action/adventure,” was born in Little Rock, Arkansas. During World War II, on December 7, 1942, days before his fifteenth birthday, Don enlisted in the Navy, serving until 1947 as a Radioman.  He returned to active Naval duty during the Korean Conflict.

Following the war he worked as a railroad telegrapher, CAA/FAA air traffic control specialist, and aerospace engineer.  In the latter career, he was a senior engineer for Martin-Marietta's Titan ICBM programs and as an engineering administrator in NASA's Apollo Moonshot program.

He published his first short story in 1957 and his first novel in 1961. Leaving his aerospace career behind, Don turned to full time writing in 1967, and produced a number of mystery, science fiction, and futuristic novels, a screenplay, numerous poems, short stories, and essays. Then, in the year 1968, a time of civil unrest, love and flower power, psychedelic streets of Height-Ashbury and Berkeley, and the horrors of the Vietnam War,  Mack Bolan, the Executioner, was conceived in the mind of forty-year-old Don Pendleton.  The phenomenal success of the first novel, War Against the Mafia, published in 1969, led to thirty-six sequels.  Dozens of imitators, inspired by Don's success, arose during the early seventies to create a new American literary genre, and the term, action/adventure, coined by Don, soon spread to encompass television and motion picture formats, as well.  The original Executioner novels have been translated in more than thirty languages with in-print figures of more than 200 million copies worldwide.

In 1980, Pendleton franchised his Mack Bolan characters to Harlequin's World Wide Library and their Gold Eagle program has since published about 900 books, including spin-offs: Phoenix Force; Able Team; Stony Man; Super Bolan, in addition to The Executioner, all written by a team of writers.

In August, 2014, Hollywood screenwriter, producer, Shane Salerno, announced  his plans to produce a film franchise of Mack Bolan, after licensing the movie rights of Don's original Executioner novels, and the Gold Eagle novels, forty-four years after the movie rights were first optioned by Hollywood.  It is the Don Pendleton family's hope that this time Mack Bolan will make it to film.

In 1990, Don turned to nonfiction, and with his wife, Linda Pendleton, wrote To Dance With Angels, a definitive study of life after death and spirit communication.  Don and Linda also co-wrote Whispers From the Soul: The Divine Dance of Consciousness.  Don's last novel was Roulette:  The Search for the Sunrise Killer,  co-written with Linda.

Following Don’s death in 1995, his last two nonfiction books, A Search for Meaning From the Surface of a Small Planet, and The Metaphysics of the Novel:  The Inner Workings of a Novel and a Novelist, a book for aspiring writers, were published.  Linda also published The Cosmic Breath: Metaphysical Essays of Don Pendleton.

Don was a long time member of the Authors Guild; Writer's Guild of America, West; Past West Coast Director of Mystery Writers of America; International Platform Association; and a frequent speaker on campus and writer's symposiums. In 1992, Don received the Lifetime Achievement Award from Diamond Comic Distributors.

During his nearly forty year writing career, Don published more than one hundred novels, short stories, poetry, essays and nonfiction, although his worldwide recognition came from his Mack Bolan Series of paperback novels. Some of his early works were published under the pseudonyms, Dan Britain or Stephan Gregory.

For additional information on Don Pendleton's books, visit the 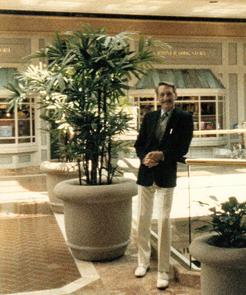 "When I wrote War Against the Mafia as a Vietnam statement, I didn't expect much to come of it-but quite a bit came and it captured me. I continued the books to feed the obvious hunger that was there for heroic fiction."
Don Pendleton